Back in 2008, when Barack Obama came out of nowhere to win the presidential election, many Americans, myself included, wept for joy.  Growing up, I never thought I’d see the day when America would elect a black president. 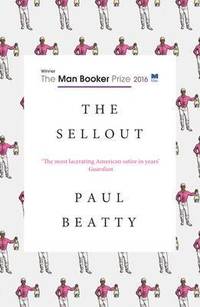 Klicka och låna
Many naively (and some cynically) declared that we now lived in a “post-racial” America. Eight years later only the most cynical or most naïve person would make that claim.  As popular as Obama was with half of the American population, he was still replaced by you-know-who.

Race relations in America are a mess, like an overgrown rain forest.  Leading us through this jungle, with his machete of a book, is Paul Beatty.  The Sellout is set in the fictitious agrarian ghetto of Dickens, just outside Los Angeles. The narrator, BonBon (aka The Sellout), is raised by his radical father, an academic psychologist, in an incubator of radical black thought and politics. BonBon describes his childhood in an early scene:

When I was seven months, Pops placed objects like toy police cars, cold cans of Pabst Blue Ribbon, Richard Nixon campaign buttons, and a copy of The Economist in my bassinet, but instead of conditioning me with a deafening clang, I learned to be afraid of the presented stimuli because they were accompanied by him taking out the family .38 Special and firing several window-rattling rounds into the ceiling, while shouting ‘Nigger go back to Africa!’ loud enough to make himself heard over the…stereo blasting ‘Sweet Home Alabama’ in the living room. To this day I’ve never been able to sit through a TV crime drama, I have a strange affinity for Neil Young, and whenever I have trouble sleeping, I don’t listen to recorded rainstorms or crashing waves but to the Watergate tapes.

The Sellout is an extremely funny book. It’s also difficult to read.  The plot isn’t complicated – BonBon takes on the cause of putting Dickens back on the map, eventually taking a slave and reintroducing segregation on the local buses, and is brought before the Supreme Court.  But the plot is really secondary to the wonderful writing that reads almost like stand-up comedy, or a skit from Dave Chappelle’s immensely successful show (many reviews have compared Beatty to Chappelle and Richard Prior, as well as Mark Twain).  Beatty takes swipes at the left as well as the right, at political correctness, pop culture, Afro-centric intellectuals, and most of all the idea that America is a post-racial society.

On March 27 we begun discussing The Sellout in four parts. To take part in the discussion, join our Facebook group “Göteborgs Stadsbibliotek läser The Sellout” and check out The Sellout in whichever format best suits you.

This website uses cookies to improve your experience while you navigate through the website. Out of these cookies, the cookies that are categorized as necessary are stored on your browser as they are essential for the working of basic functionalities of the website. We also use third-party cookies that help us analyze and understand how you use this website. These cookies will be stored in your browser only with your consent. You also have the option to opt-out of these cookies. But opting out of some of these cookies may have an effect on your browsing experience.
Necessary Alltid aktiverad
Necessary cookies are absolutely essential for the website to function properly. This category only includes cookies that ensures basic functionalities and security features of the website. These cookies do not store any personal information.
Non-necessary
Any cookies that may not be particularly necessary for the website to function and is used specifically to collect user personal data via analytics, ads, other embedded contents are termed as non-necessary cookies. It is mandatory to procure user consent prior to running these cookies on your website.
SPARA OCH ACCEPTERA